The DAIS 11th grade IAYP trip to Matheran from the 11th to the 13th of October 2012 can be described using a number of words that seem to want for a connection. Uphill. Frogs. Orange Whistle. Ropes. Before last week, had you told us that even one of these words would ever carry any particular significance to us, we would probably have scoffed at you, told you to take your Frogs and go away, but now, not only do these words carry unique meaning, they are synonymous with memories. 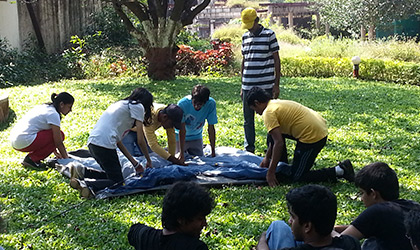 When you assemble one hundred 16 year olds on the premises of an educational facility at the ungodly hour of 6:30 in the morning, you can expect only a soporific atmosphere of subdued chatter and yawning and the morning of the IB IAYP camp was no exception. Sleep deprivation prevented us from complaining as we were torn from our friends, loaded onto buses, as we were handed boxes of food that would be picked at for the next two hours. But this exhaustion was left behind, along with our junk food, in Bombay, and by the time we began the trek up to Rugby, you could almost taste our collective excitement in the crisp high altitude air. 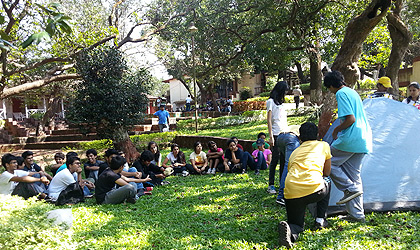 Pitching tents, climbing trees, and mixing coffee powder and boiled milk together in estimative proportions occupied the first day of the trip, during which we were divided into four groups, in which we spent the duration of the camp, herded around by an elected Group Leader. 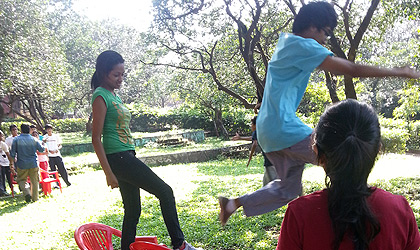 The second day of the trip began at 7am with ‘exercise’, which turned into breakfast, into a fulfilling 8 kilometer trek, into activities that without a doubt involved strapping yourself into a harness and climbing up, down, or across something like a possessed primate. 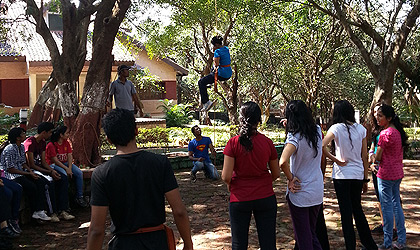 These activities showed us the importance of teamwork, of being able to have faith that if the instructor decided to shake a rope up and down while you were hanging 15 feet up off the ground, suspended by it, your friends would find a way to rescue you.

The second day of the trip also involved a student-initiated session of ‘frog catching’, successful completion of which was awarded with the opportunity to give your prize a name and then watch him/her hop away. 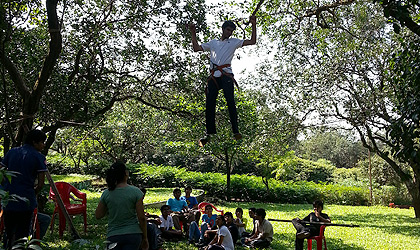 Circularly, the last day of the IAYP camp began with the infamous 7am exercise and ended with the completion of the 40 minute trek back down to the bus station, upon which we were allowed to collapse, wordlessly as before, onto the lovely yellow buses that brought us home to our (now) seemingly dull lives.

Apart from fulfilling every one of the omniscient CAS requirements, this trip went above and beyond in the extent to which it taught us all to work together, to live together, to deal with each other for prolonged periods of time, even reaching the point where we began to depend upon, if not everyone, at least our three roommates, in ensuring that someone was in possession of our neon yellow tagged key.

The entire grade came back to school on Monday in excited verbal anticipation of the next IAYP camp, scheduled for February. How exactly this second trip will live up to the high standards that it has set for itself in the first one, is beyond me.