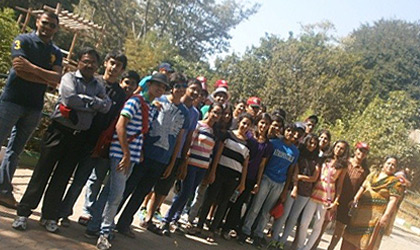 Day 1 – Class 9 A went on a trip to Bangalore - Mysore from 9th January to 14th January, 2013,  accompanied by teachers, Ms Shiney Varghese, Mr. Kesavan Nair, Ms Kamal Kaur and the security officer, Mr. Bhupender Thomar. The students assembled at school well in advance of the scheduled time and the journey to Bangalore - Mysore went off very smoothly. 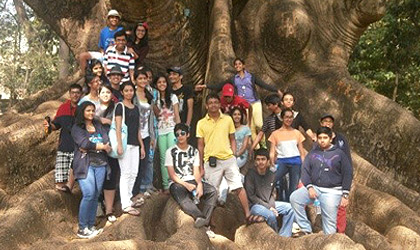 Day 2 – We arrived in Bangalore at 9 o’clock in the morning after an exhilarating 24 hour long journey and were taken to Hotel ‘The Canary’.. The rooms were comfortable and the students settled in quickly. After a scrumptious lunch and a couple of hours of rest on the first day, we were taken to Banner ghatta Zoo , one of the best zoos in the country and home to 25,000 acres of lush forest land and an amazing variety of animals. It was a hair-raising and unforgettable experience. Seeing the majestic tigers strutting around among the trees, we too felt India’s immense pride well up inside us. The lions' mane flying in the soft, salubrious breeze of the afternoon sky enthralled us. We saw Black Bears, deer, lions, tigers and were even fortunate enough to sight a white tiger too!  All were too excited and thrilled to actually see these animals very close to the Safari. Most of the students enthusiastically clicked photographs. 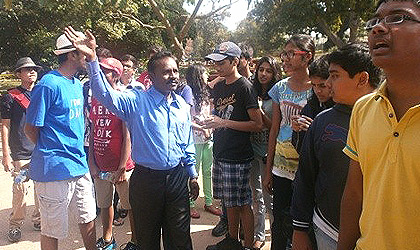 Later, in the evening after dinner everyone had a fun-filled DJ night. The students danced enthusiastically to the catchy tunes and thoroughly enjoyed the DJ night.

Day 3 – The next day after breakfast we were taken to Lalbaug Botanical Garden, the second largest botanical garden in India. We saw various species of beautiful plants, trees and flowers, such as the multi- coloured rose garden, silk cotton trees, a 165 foot tall Australian pine tree, etc. The experience was soothing, relaxing and rejuvenating!  After that went back to the hotel for lunch and then boarded the bus for a four hour long journey to Mysore. 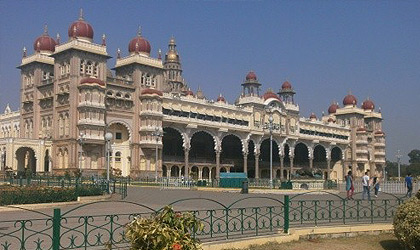 Day 4 – A charming and quaint, yet action filled city, Mysore- often called as the white, green, silk, royal or sandalwood city, had surprised us. We checked in at Mysore KVS International. Having reached quite late in the evening we had our dinner and retired to our rooms for the night.

The next day we first went to visit the Silk Factory. It was hard to imagine that the raw silk taken from a silk worm could be transformed into such a beautiful sari! The entire process was explained very well to us, by the employees, and it was a very enriching and informative experience. 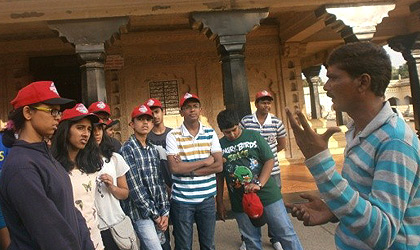 The palace spreads over 8 acres of land. When we were being shown around the historical palace we came across a row of 26 paintings painted by 6 painters. The unique features of each of the figures of the painting were astounding to see. In some of the paintings it seemed as though the eyes or the shoes were turning towards us as we moved. The palace is a treasure house of exquisite carvings and works of art from all over the world. 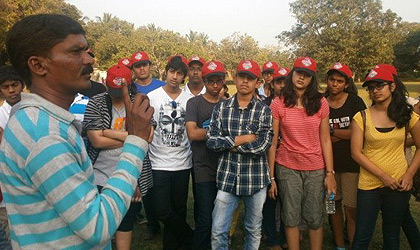 Srirangapatnam, was our next place of visit. Here we saw Tipu Sultan’s Summer Palace (Dariya Daulat). The palace walls have been elaborately painted with panels and decorative motifs. On the walls were paintings, depicting the battles of Tipu Sultan. After this we saw the Tipu Sultan's Museum.

The museum housed in the Dariya Daulat contains many items and personal belongings of Tipu and his family. 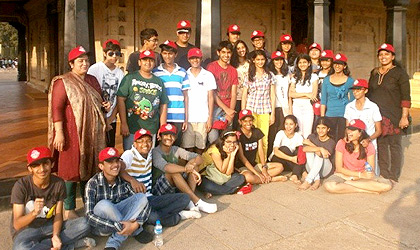 On the way back, to the hotel we passed by a Masjid where Tipu Sultan used to offer Namaz, his death place, the Maharani's Palace, Tipu Sultan's Central Jail and the Sriranganatha Temple.

After having snacks at the hotel, we left for the Cauvery Handicrafts Emporium. Here there were a number of articles on display, ranging from soaps, to incense sticks, to wooden idols to jewellery. Many of them bought some thing or the other, as a souvenir from Mysore.

After the shopping we went back to the hotel, where we had a DJ night. It was a crazy night, and we danced till our heart's content, as it was the last DJ night in our trip. After this intoxicating night, we relished a mouthwatering dinner, and retired.

Day 5 – After breakfast we left for Chamarajendra Zoological Garden. The visit to the zoo was beyond words. There were scores of species of animals right from elephants, tigers, lions, rhinos, snakes, alligators, zebras, cheetahs and hyenas to eagles, parrots, peacocks, pheasants, bears, monkeys and turtles. It was truly a thrilling and exhilarating encounter with the wild! 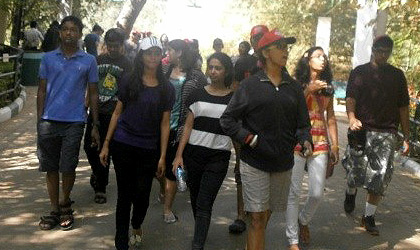 We came back to our hotel, and after lunch, left for Bangalore via bus. We reached Bangalore and then boarded our train to Mumbai at about 7:30 p.m

Day 6 – After an overnight journey on the train, where we played lots of games and interacted with each other and our teachers, we reached Mumbai on 14th January, night. We went back to our homes, cherishing the delightful experience, and wonderful memories of Bangalore and Mysore!

Our trip to Bangalore and Mysore was truly an informative and enriching one. It increased our historical knowledge to a great extent, and reminded us of the glorious works and achievements of Indian kings, especially Tipu Sultan. We learnt so much about the British rule in India as well, and its impact on South India, something we were never aware about before. From the zoos and gardens we visited, we got to know a great deal about the flora and fauna of that region, its special characteristics, and much more. The silver lining to our entire trip was the visit to the Silk Factory. The factory left us in awe and fascination of silk production.

All in all, our class trip was a fun-filled learning experience, which left us with knowledge and memories that we could cherish throughout our lives.