Our Visit to Maharashtra Nature Park 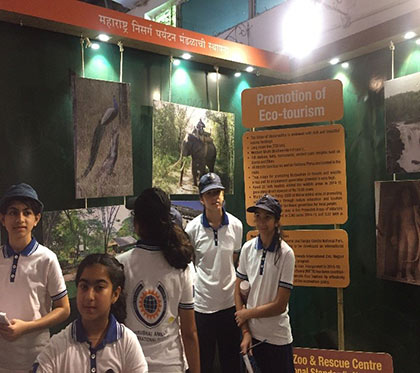 On 7th October 2016, classes 5A and B visited Om Creations, a social enterprise.

On 20th October, Classes 6A and 6B visited the Maharashtra Nature Park. In the morning, when we were merrily piling up into the bus, we had no idea of the amazing things we were about to see! Upon arrival, we were told to sit in a shady area, where two wildlife photographers gave us an introduction to the park. We learnt that the park was built on a dumping ground.This showed that if we put our minds to a task, even the most putrid-smelling rubbish heap can be transformed into a beautiful forest. There are 9 species of snakes in the park, out of which two were venomous. They have 125 species of birds and 80 species of butterflies too. Out of the 750 plant species here, many are poisonous!

Before setting off on the nature trail, we were shown a presentation on the different forms of wildlife and plants in the park. They were spectacularly photographed! We were introduced to many new plant species, such as the ghost tree and the flame of the forest, which looked as though the trees were on fire. 45 species of birds come to suck nectar when the flowers blooms. In the olden days, people believed that the ghost tree was possessed by evil spirits, and on full moon nights, it would look as though a woman was standing there, draped in a white sari. All of us were quite amused at this folktale. We also learnt about mangroves and how they protect us from floods, how many birds and fishes live in the forests and how, most usually, their roots go down and then begin to grow upwards.

On our nature trail, our guide was a well-experienced wildlife photographer, snake rescuer and butterfly expert. He kept stopping to show us interesting flora and fauna. We found that nature has so many amazing, unusual, enchanting elements-which can be seen if we look carefully enough. We saw attractive butterflies like the Tailed Jay, Chocolate Pansy and Glassy Tiger butterfly. I wonder who keeps such exotic names for these creatures?

We spotted a caterpillar pretending to be a green twig on a leaf, a hoopoe bird which is apparently very rare and a black nib monarch bird. We could also hear the pleasant hooting sound of the Asian Koel. Pointing to a fig tree, our instructor told us that figs are not categorically fruits, they hold tiny flowers and fruits inside them, called pips. He also told us about plants that have medicinal properties-papaya leaves cure dengue, and the Ganoderma fungi have anti-cancerous properties. The highlight of the visit however, was when we saw a red sand boa snake basking in the warm sunlight! Our guide fearlessly picked it up and all of us took turns to touch it. It was a novel experience for us, as most of us hadn’t ever done that!

Before we knew it, it was time to leave for school. We were sad that we could not continue our trail, but were also very happy that we had learnt so much. We thanked our instructors, as they had been willing to share with us their treasure of knowledge.

Sadly, there is only 7% forest cover left in India. India is one of the 12 Mega Biodiversity Nations in the world. Can we retain this diversity? Will it be possible to show the future generations all of these wonders, which we witnessed today? We have to start taking action NOW! 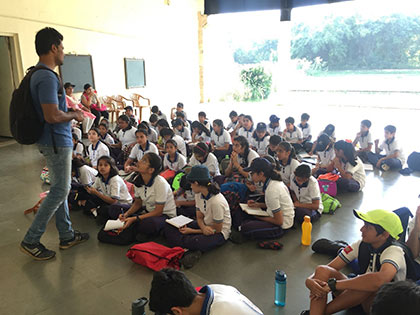