Read our latest RS Alumni Story : All about Shivam Jumani

Mumbai City –  dynamic, energetic and ever-changing – was not just a home for Shivam, but an inspiration. The dense and diverse urban environment underwent a period of significant growth a decade ago in ways that Shivam recalls vividly: “New bridges, train lines and skyways sprung up seemingly overnight. You couldn’t escape the sense of Mumbai’s ambitious spirit: this was a city in a third world country really going for it. But alongside this furious development, one would often see debates in the press about the impact of our growth – concerns about pollution and congestion commanded media debate.”

Growing up through this change ignited Shivam’s interest in the built environment, an interest that would take on a very specific leaning through his Round Square experience.

Shivam’s first exposure to Round Square was at a time when he describes himself as being, “a confused 9th grader. I was a little shy, a little unsure about what steps to take in the future: it’s fair to say I was ready to be shaped.” At the time, Round Square was one of many extra-curricular club options available to students.  As the school had only recently gained membership status, Round Square was a new offering for students and Shivam was immediately curious about what might be involved. “There was definitely an immediate affinity for me with the IDEALS that drew me to getting involved with Round Square.”

Shivam did not have to wait long to see the spirit of the IDEALS in practice, as soon after joining, he was whisked away to fellow Round Square school, Sanskaar Valley, to participate in his first regional conference. Although the majority of students present were from India, the backgrounds of the delegates could not have been more different. “I had never interacted with anyone else of my age outside of my school so it was fascinating for me to learn about the different types of schools, upbringings and areas that the students were from. Having grown-up in a city, my experience of life was so different from other students who had grown-up in the interior. The Conference was such a rich experience for me and I really enjoyed performing at the cultural show, participating in my first baraza and socialising with the delegates; I stayed in touch with the people that I met there for a few years afterwards.”

A year later, Shivam had his second conference experience when the regional conference moved to his school. This time, he was at the heart of operations as President of the organisational committee. The Conference provided him with his first opportunity for public speaking outside of the classroom setting, in an auditorium filled with over 100 strangers, his every word amplified by the mic, and every move captured on camera:

“Standing behind that podium was especially daunting; I remember my legs trembling behind it! But I was lucky enough that nothing unexpected happened on stage, and although it pushed me out of my comfort zone, the opportunity made me a lot more confident and helped me overcome my fear of public speaking.”  It was the first of many speeches for Shivam, who would routinely address audiences in his role as Head Boy of the school, just a few years later.

Shivam also gained an insight into the challenges of leadership; learnings which he would take with him much later into the workplace. His role required him to work with all different kinds of people from the exec team and other students to the school admin staff. He says, “It is important to understand people’s motivation for doing things. In the case of this conference, is it for their resume? Is it because they really care about the cause? Or is it because they have been forced to do it?! Knowing these things helps you manage expectations and use the opportunity to galvanise the enthusiasm of team members where it’s useful to do so. Treating the people you work with as different individuals with unique personalities, and recognising that there are many ways other than yours to get things done, helps both you and them achieve things much faster.”

Shivam also learnt how to navigate the excitement and frustrations inherent in any large organisational project: “Some days it felt like all our plans had been thrown off course and moving forwards and getting things done was an uphill battle. I had to learn to keep calm when all around me might be panicking!”

Shivam’s conference experience culminated with an opportunity to join the DAIS delegation at the 2010 UK International Conference, where he was honoured to meet Queen Elizabeth II.

His immersion into Round Square continued with a challenging service project to Ladakh, an enchantingly remote area extending across the magical terrain of the Kunlun and Himalayan mountain ranges. It was touch and go as to whether Shivam would even join the project as a few days before, he had sustained a major injury to his leg.  Doctors had advised him against participating but he was determined to go. On arrival at the camp, the students took a good three or four days to acclimatise to the height and reduced oxygen levels before beginning their service project work building toilets at a local school. Shivam remembers how “everything was different” for him and the other participants, from the tented accommodation and pit toilets to washing in the stream. The team was happily isolated by the lack of phone and internet reception (“just you and the views”) allowing all members to immerse themselves in the environment and build warm and close relations with students at the project school,  “I got really close to a few of the students at the school and it was heart-breaking when I had to leave.” 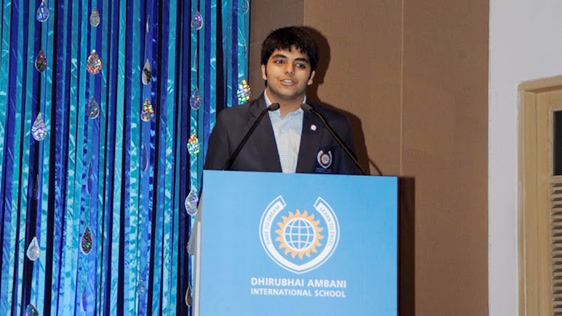 For an urban enthusiast, it comes as no surprise to learn that Shivam gained his degree at New York University, qualifying in urban design and economics. Whilst studying, Shivam eagerly took on a number of internship positions, providing opportunities to learn about the social aspects of real estate development, from affordable housing to working with the public sector.

When the Sila Connection, a city-wide environmental competition, launched on campus he and two other teammates submitted a proposal to meet the challenge of using limited funding to formulate the best waste management solution. Inspired by the principles of Sunstein’s and Thaler’s book, “Nudge”, the team proposed adding a weighing scale at the cafeteria bin. This not only measured the amount of food wasted by each individual, but also displayed the number in bold type on a screen, highlighting the amount of food wasted and essentially ‘nudging’ them to waste less in the future. Using similar logic, the team also recommended placing a longitudinal mirror above the bin, so diners could see themselves ‘wasting’ food. Shivam’s team won the competition and the prize money was used for the project’s implementation at one of New York University’s dining halls.

Shivam went on to gain a Masters in Real Estate Development at Columbia University in New York City and aspires to become a real estate developer. “A real estate developer can sometimes have negative connotations but I feel strongly that you can choose whether you want to exercise your skills in a way that will positively impact the built environment. I chose to specialise in real estate as I care deeply about getting involved in the urban fabric of a city, acting as an agent of change and making practical decisions that will benefit people’s lives.”

Before he could take a deep dive into the world of real estate, Shivam decided to gain some experience as a Research Analyst at an influential consulting firm in New York that works on a range of projects related to the built environment.

He worked closely with the lead advisors of a climate action plan for New York City that was released by the Mayor’s Office of Sustainability in October. The City is the first in the world to publicly release such a plan that commits to certain strategies and prioritises specific actions that aim to reduce carbon emissions in alignment with The Paris Climate Agreement.

The actions listed in the plan include the introduction of long-term energy intensity requirements for existing buildings, increased investment in public transit and cycling infrastructure, and accelerating the diversion of organic waste from landfills. And what’s important to Shivam is that the plan is not idealistic rhetoric, but includes real and tangible activities that the government and New Yorkers can make happen.

The process extended Shivam’s understanding of the many factors authorities must consider when effecting change to make a difference:

“There were a lot of actions we wanted the City to do from an environmental standpoint but it was important for us to explain the wider implications of those actions. Take bike lanes, for example – they are obviously great for the environment as they help reduce usage of cars and offer residents a healthier lifestyle, but they also substantially increase revenue for retailers along these lanes, and also improve road safety. Seeing the wider co-benefits is essential from a political standpoint as it is often the only way that you can get the City, associated agencies and the people united around a plan. All of these groups need to understand how the plans will affect them; a lay person doesn’t care if global temperatures are stabilised, but they do care about facilities to help them live healthy lives and improve the community’s safety and economic development. If you can combine these ambitions, you’re on to a winner.”

In reflecting on his Round Square education, Shivam feels strongly that there are ample opportunities for all Round Square students and alumni to effect positive change: “The IDEALS came together for me in a way that informs all that I do. As a student, the tendency sometimes is to see the IDEALS as separate things, and to view them simplistically: Service isn’t just about volunteering or working for a charity, Environmentalism isn’t just about planting trees. I believe you can still make an impact by expanding the definitions of these IDEALS so that they can be imbibed seamlessly in one’s day-to-day life, regardless of one’s passion and career.”