Students of Class 10, travelled to Noida to attend the Round Square Service Project hosted by Genesis Global School. This was a Round Square conference with a difference since its aim was to organise medical camps in Noida for underprivileged people who have no access to basic medical care. 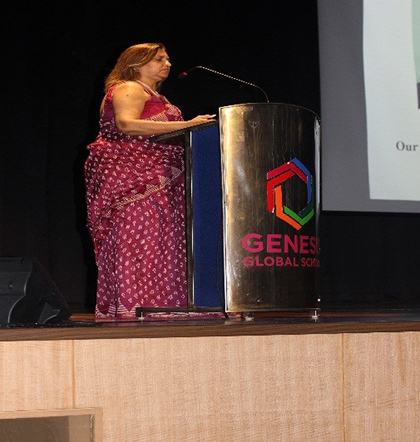 On the day of their arrival, students were assigned to their respective Barazza groups, each named after famous rock bands. The student organising committee had taken care to allot each of our delegates to a different Barazza group. This afforded them an opportunity to move out of their comfort zone and establish friendships with delegates from other schools. They were also lodged as per their groups and not as per their schools. In the evening, the first keynote speaker, Mrs Sangeeta Tiwari of St. Jude’s Home, set the note for what was to be the spirit of the project. She highlighted the efforts of her organisation in providing accommodation for children below 15 years being treated for cancer. In her moving address, she gave the delegates an insight into the vision of their founder, Nihal Kaviratne, who had been inspired by the sight of homeless families camping on the pavements outside Tata Memorial Hospital, Mumbai.

Later in the evening, an icebreaker session was held in the presence of Mr. Ajay Singh, the Principal of the CBSE section of the school. The students thoroughly enjoyed interacting with each other and presenting a product publicity campaign that they had to put together in half an hour. 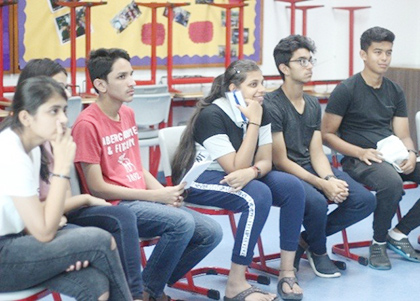 The briefing at the end of the first day gave us an insight into the vision behind the organisation of the prime activity of the Service Project- the medical camps in Noida on the second and third days. The delegates were divided into teams that moved into the slums near the venue to help in spreading awareness about the camps and to motivate people to benefit from the facilities offered.

On Day 2, the camp was held at the Community Centre in Noida. It offered diagnostic services in General Medicine, Dermatology, Ophthalmology, Dental Care and Gynaecology. There was also a counter for dispensing of medicines prescribed.

The student delegates manned the registration counters, prepared the case papers and also conducted the preliminary investigations such as checking height, weight and blood pressure. 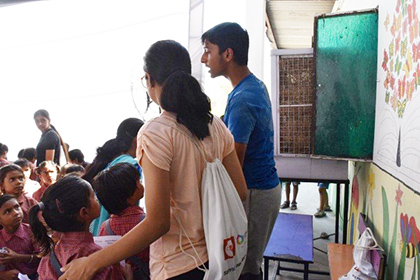 They were also posted at each counter to help in crowd management which was a stupendous task, given the overwhelming response to the camp. The response in the early hours of the morning seemed lack-lustre but as news spread by word of mouth, the camp venue was flooded with patients. The responsible task of dispensing the medications prescribed was assigned to the teacher delegates.

The delegates were moved by the awareness that basic good health care that we take for granted was denied to such a large segment of the population due to their economic status. It was indeed a humbling experience and a real eye-opener for them.

One team that was artistically inclined was allotted the task of beautifying the walls of a temple. After an exhausting medical camp on the second day, the delegates visited the St. Jude’s Home to touch the lives of young cancer survivors and to bring sunshine into their lives by dancing and singing with them. They were immensely moved by the cheerful spirit of the children in the face of such adversity in their young lives. 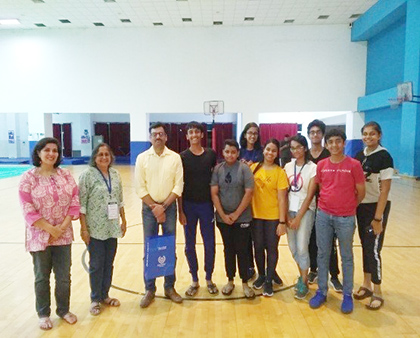 A Social Evening was organised on the evening of the third day. The students were treated to local delicacies and danced the evening away in the company of their newly-found friends.

On the fourth day, the students departed from Genesis Global School. They returned to Mumbai having formed new friendships, made memories and having touched dozens of lives with the service they provided. They also returned home with a renewed appreciation for all that they have been blessed with in life The student delegates were: