After the completion of the trip, none of the students had words to fully describe the poor living conditions and the harsh realities that they saw at the village of Nathon ka Pura. No one had words to fully describe the sorrow and pain in the eyes of each and every villager they interacted with in the village. There were no words to fully describe the hard-hitting realization that they experienced over the course of this service project about how privileged they really were. This holistic experience transformed them as individuals, creating a window for them to understand the larger world. Below, each day of the project has been described in a way that truly encompasses the transformational experience that the students gained as part of this service project. 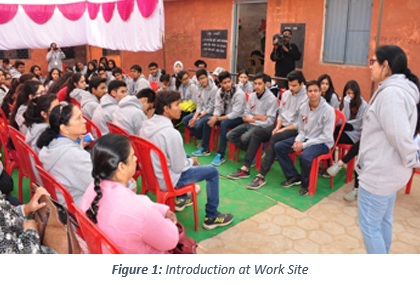 On the first day of work at the site in Nathon ka Pura, the students had an introduction to the work to be done. Each of them were divided into groups to engage in all four of the activities at the village – toilet building, sewage channel building, women empowerment, and village survey. On Day 1, our school’s students were assigned to the women empowerment and the sewage channel building teams. 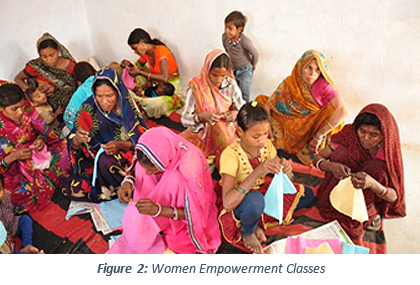 They were moved to see the sense of hope in the eyes of each and every girl participating in the women empowerment class – hope in the face of adversity, hope in the face of the banning of their sole profession of snake charming by the government, hope in the face of a patriarchal society. This very hope motivated the students to work with these village women to develop their skills in arts like weaving, tablecloth painting, handicraft making etc., to provide them a basic source of income. After the women empowerment session, they participated in the sewage channel building project. This was an extremely exhausting and physically challenging task, as it involved laboriously carrying heavy buckets of cement and heavy bricks up a steep slope to help build the channel. 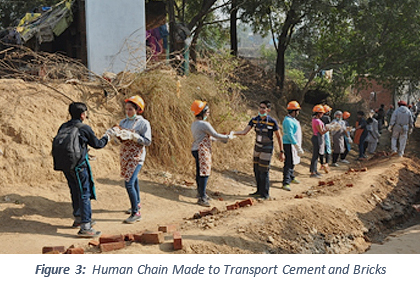 In order to ease the process and maximize efficiency, the students decided to use a human chain to transport the bricks and the cement up the slope. This task forced them to work outside their comfort zone, as they were not used to such physically challenging work in their daily life. After continuing the transportation of cement and bricks for the next 2 hours, they ended the day’s work and returned back to the Scindia School to rest, after a tiring day.

On the second day, the students continued the transportation of bricks, after 200 new bricks were delivered to the village. Over a total of 5 hours, they laboriously transported over 150 bricks up a steep slope for a distance of around 300 meters. This task was very physically challenging, especially because the distance to be covered by the human chain was longer and the number of people part of the human chain was lesser (as some people were assigned other duties on the second day). This led to a very tiring 5 hours, as each individual in the human chain had to walk 4 meters, carrying heavy cement and bricks, to reach the next person in the chain. 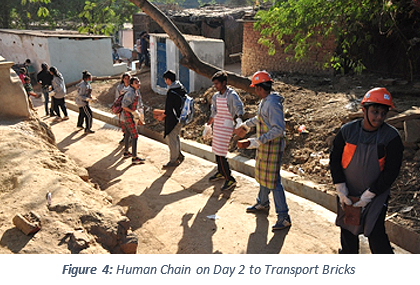 This inevitably slowed the students down, but they continued to work with grit and determination to transport as many bricks as they could, up the slope. On this day, they also distributed food to all children in the village, who were hungry for several days at a stretch due to poverty and the shortage of food in the region. The distribution of food was a real eye-opener, evident by the expression on the face of each and every young hungry child who was served hot piping food by members of the Round Square project. 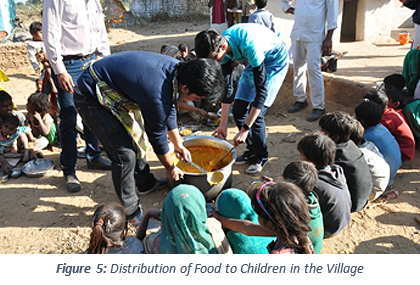 After the transportation of all bricks, they ended the day’s work and returned back to Scindia School. Later in the evening, they had the opportunity to attend a light and sound show in the Gwalior Fort, which gave them deep insights into the culture of that region. Thus, this Round Square project not only allowed them to serve underprivileged people but also provided a cultural window to better understand a new culture and historical background in specific, and the world at large.

On the third day, all 5 students were assigned to the village survey team, and hence they, along with a group of 10 other students, went around the village to survey 10 households. This survey was a truly moving experience. They met villagers who hadn’t had food for several days at a stretch. They met villagers who had given birth to children who all died before the age of 5. 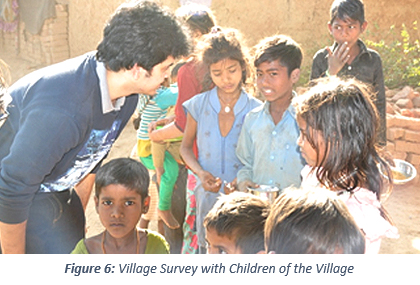 They met villagers who had an uncertain source of income. Apart from this, they also met an 18-year-old girl who had been married off at the age of 13, and had given birth to 2 children, both of whom died at the age of 2 months. They met a young girl with mosquitoes flying all around her, because she hadn’t had a bath for months. This was the hard-hitting reality that the students were exposed to during the village survey, which served as a powerful eye-opener. After the village survey ended, they returned back to Gwalior city and visited the Gwalior museum, which again served a cultural window for them to understand a culture previously unknown to them. The day ended with an “IDEALS” session, that described the ideals of the Round Square foundation and how each of the ideals was implemented in this service project. 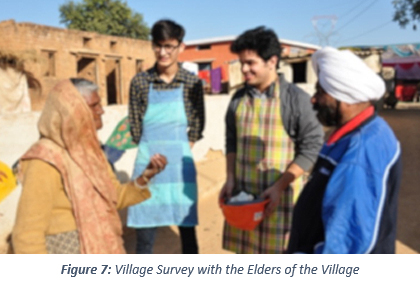 This was an extremely thought-provoking and interesting discussion as the students discussed how the 6 ideals (Internationalism, Democracy, Environment, Adventure, Leadership and Service) were interrelated, and the role each of them played in furthering the Round Square Mission Statement. The day ended with a grand presidential dinner that included a delicious Indian cuisine buffet.

On the fourth day of the service project, the students basically started to wind up all the work done in the previous day. This basically included breaking up any piles of waste created during the making of the sewage channel, and transporting this waste to a nearby dumping spot. This was extremely tedious especially because the waste sand had stuck together, making it difficult to remove. 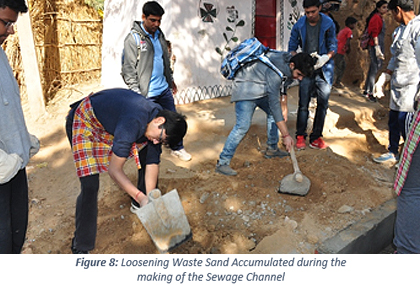 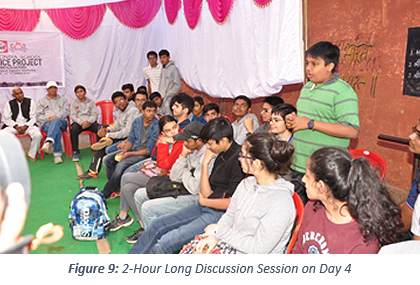 This division of labour made it easier and faster to complete the work, leading to all the waste being cleared off within 3 hours. The work day was fairly short, as they finished the day’s work by noon, and then engaged in a 2-hour long discussion session where they talked about their learnings from this Round Square service project and its applicability in daily life. During this session, the students also made news articles and brochures to summarize all the work done as part of the project.After they returned back to the Scindia School, they had a fun ‘Chaat Party’ in order to end the service project on a happy note.