From 13th to the 28th of June, the Scindia School hosted a Regional Round Square Service Project in Thiksey’s Lamdon School in Ladakh. Around 20 children were selected from schools dedicated to the Round Square ideals and committed to bring greater social change to the community. Three of us were given the opportunity to venture into the lap of the Himalayan Mountains wherein we immersed ourselves in not only humanitarian service, but also Ladakh’s rich cultural history. 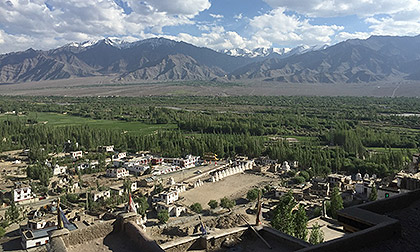 For the first three days, the priority was to acclimatise ourselves to Ladakh’s altitude and climate. This gave us a splendid opportunity to visit the Leh markets and the Shanti Stupa, a famous monument which is renowned for its religious significance and panoramic views of the city. Additionally, a pastor in Leh’s Moravian Church enlightened us about the rich Ladakhi history. We were deeply fascinated by how the religious fabric of the region was closely intertwined with Ladakh’s past. The peaceful coexistence between various contrasting religions, such as Shia and Sunni Islam, was nothing short of impressive. 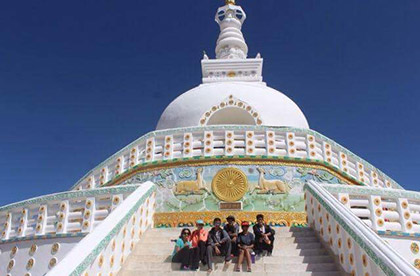 We reached the Lamdon School with great excitement, freshly rejuvenated by our stay in Leh. For the next week, it was our task to build rooms for the students of the school. We began our work with great vigour. Loading and unloading bricks, creating the cement, and carrying logs for roofing, we were soon working rapidly. Despite initial confusion, we became a welloiled machine, united by our common goal of service for a greater cause. Our exhaustion was quite evident in the afternoon ritual of group back massages! After toiling the whole day, nights were dedicated to reflection and enter tainment provided by the domestics team.

The absence of internet in the village meant that we all relied on traditional games such as football and cricket r a t h e r t h a n s o c i a l me d i a f o r entertainment. We realised that these games forged a stronger and faster bond between us than Facebook or Instagram ever could. Furthermore, the lack of technology didn't even affect the experience. We learnt to be independent of our phones as we engrossed ourselves in our work and appraised nature instead. One of the most memorable experience was during our field trip to Pangong Lake, where we were given the opportunity to marvel at the picturesque views of the mountain ranges and the pristine waters of the lake, sights nonexistent in our concrete jungles. Furthermore, exposure to Buddhism via the visit to Thiksey gompa (monastery) gave a captivating understanding of Buddhist traditions and lifestyle.

Playing, teaching and interacting with the children in the Lamdon school during our free time and ‘domestic work’ days gave us a greater insight into their lives. We all were quite impressed by their desire to learn and their enthusiasm and cordial personality was commendable. However, their ambitions were hindered by the deprivation of trivial resources. This inspired us to work with a greater drive and truly help these children fulfil their dreams. Seeing them smile, laugh and call our names affectionately resulted in us building the dorms at a greater pace than expected, giving us all a feeling of accomplishment. Moreover, the costumes, dances and songs of the final performance was magnificent and it was a privilege to join in their celebration. Signing books and sharing numbers with the children on the last day was a tearful experience as both parties were hesitant is saying farewell. 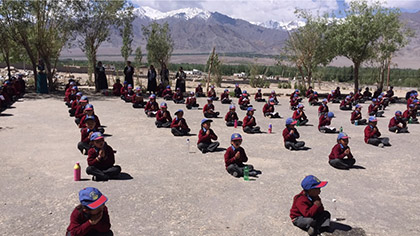 Due to health issues, I was unable to accompany the group for the Trek phase and stayed back in Leh. Nevertheless, these days didn’t turn out to be futile and I didn’t squander my opportunity to explore Leh to a greater extent. A visit to the Army’s Hall of Fame augmented my feeling of patriotism as I was exposed to the harsh lives of our country’s defenders. The 17th Century Leh Palace astounded me with its remarkable architecture and I was impressed by the traditional handicrafts sold in the famous Leh market. 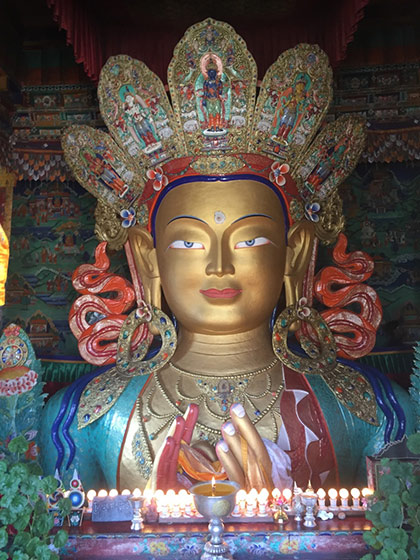 In these two weeks, students aspiring for a better world, were given the chance to gather and work together to achieve this very goal. Collaboratively, we managed to build two rooms for the children of the Lamdon school and were rewarded with the most satisfying gift—their smiles. This service trip in Ladakh had not only enabled us to serve a greater purpose, but has also helped us develop a better understanding of society, and more importantly, ourselves. 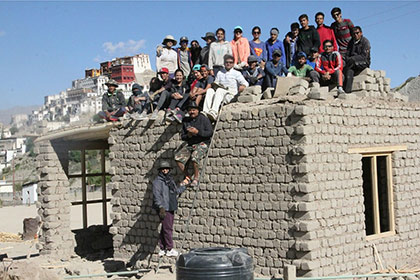