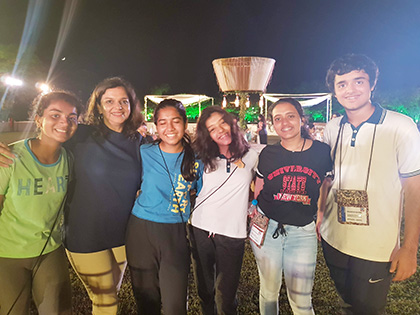 Arrival Day (Day 0): The students arrived at the Emerald Heights International School, greeted with the familiarity and warmth, with traditional Indian drums and pearl necklaces. The comfort exhumed from that welcome assured the students that the week before them would be rich in culture, love, and friendship. On arrival, they were acquainted with 700 students from 6 continents and over 156 schools. It was momentous. The day’s proceedings were no less. The students started with a typical Indian meal and then went on to get ready for an evening of sports. Not only did they make friends while playing sports like tennis, football and basketball, but they also exchanged the quirks of their respective cultures, forming strong bonds. The dinner that night was beautiful carnival with lights and singing performances, and needless to say, the food was delicious. The students went back to their dorms and called it a day. Here, they first met their roommates from across the globe. Those were the proceedings of the arrival day, and only a fraction of what was to come. 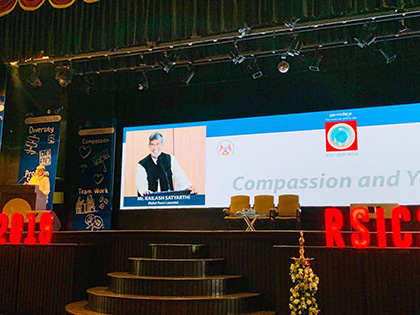 Day 1: Day 1 started with breathtaking flag ceremony. The students saw schools they never knew existed and places from all across the world proudly display their flags. They moved into the first keynote speech by Mr. Kailash Satyarthi. Mr. Satyarthi was a nobel peace prize laureate who taught them about how each one needs to take a stand in life. "If not you, then who? Who will save the world from its devastating problems?" It was an extremely inspiring speech.

There was an insightful Barraza group discussion on the same. 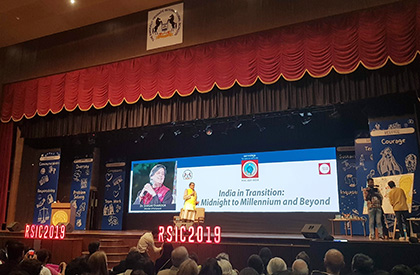 Following this, Dr. Sashi Tharoor addressed the students about the socio-economic growth of India, while highlighting the persistent problems that are waiting to be addressed for continued development. His articulate and confident speech was received with thunderous applause. Finally,the students watched cultural performances put up by several international schools, ate a scrumptious Indian meal and headed back to their dorms. 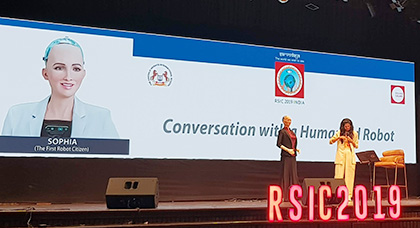 Day 2: The second day of the Round Square International Conference was eventful and exciting. From witnessing some really enriching cultural performances from international schools to having the opportunity to listen to the day's keynote speakers- Sophia the humanoid robot, and Ms. Kiran Gandhi, musician and activist- it was an eventful and inspiring day. 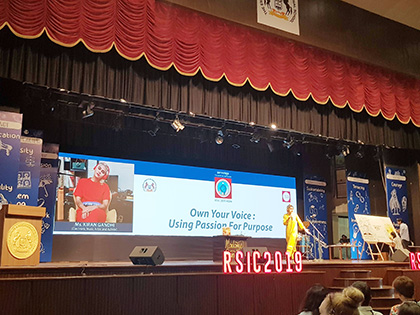 Sophia was a live example of how much Artificial Intelligence has progressed in the world. The students were given the opportunity to pose certain questions to Sophia during which they got to know a robot's perspective on the real world problems today. Next was Ms. Kiran Gandhi, who was possibly one of the most enthusiastic keynote speakers whom the students were addressed by. It was hard to determine which was better- her speech or her jamming session which followed. Her speech gave them an insight into her life and her struggles and gave them a valuable lesson, that is, for each one to pursue something that they are really passionate about. Following these speeches was a Barraza (group) session, where students discussed the keynote speakers and did certain other engaging activities in the groups that they were sorted in. Subsequently, they proceeded for the multicultural evening, witnessing magical performances from their peers from different parts of the world. The dinner mela, inspired by the theme 'Padharo Mhare Desh', comprised of delicious food coupled with even more extravagant and awe-inspiring performances prepared by the host school. It was possibly the best ending to what had been a perfect day in all respects.

Day 3: Day 3 of RSIC 2019 was a culturally enriching experience for everyone. The students visited Mandu, a site of historical significance consisting of many monuments. 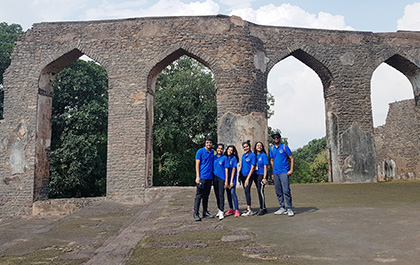 In Mandu, the students visited 4 monuments- The Rani Roopmati Pavilion, The Jahaaz Mahal, The Baz Bahadur Palace and the Jami Masjid. Along the journey, they learnt about the cultural and historical significance of these sites through the mythological and historical tales associated with them. The Baz Bahadur Palace and Rani Roopmati Pavilion belonged to the husband and wife who were patrons of music as evident in the acoustics of the monuments. The Jami Masjid, the tomb of Hoshang Shah was an inspiration for the Taj Mahal. The Jahaaz Mahal belonged to King Ghiyasuddin after which it was taken over by his son. The beautiful architecture and historical importance made this a fulfilling experience for all. 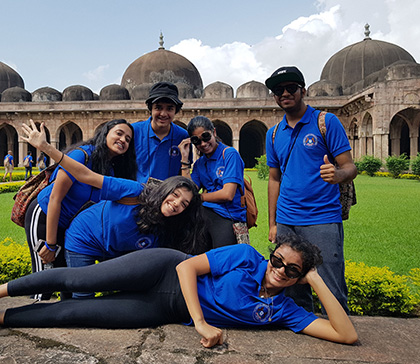 After marveling at these wonders, the students were engaged in a multicultural evening where they witnessed performances of various traditional acts from around the world.

Interacting with these various cultures was a remarkable experience for students, allowing them to broaden their world view and enjoy and appreciate the beauty of other cultures. Once again, they returned to their dormitories, completely satisfied with a day well-spent.

Day 4: This day of RSIC was an inspiring and hard working day for the students. They first departed for different service activities in Indore, including painting walls at a government school and helping decorate bedsheets and pillow cases through block printing for an old age home. After they returned from their service activities, the students departed for Maheshwar- a town full of history on the banks of the river Narmada. They saw the spectacular temple and the scenic fort and learnt about its historical significance during the reign of the Mughals.

The children also had the pleasure of indulging in famous Maheshwar handicrafts and clothes. They also saw the weavers at work that create the popular Maheshwari saris. Overall this day was culturally enriching for our students. 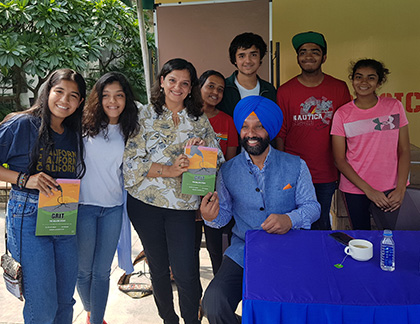 DAY 5: Despite the sad atmosphere that kept growing as the conference came to an end, beginning the day with a 3 km run in the morning for cancer awareness kept the students' spirits up! The keynote speakers kept them on our toes with their energizing and interactive talks. The first keynote speaker for the day was Major D.P. Singh, who is a retired officer of the Indian Army. He is a Kargil War veteran and is known as India's first blade runner. He told them the inspiring tory of how he overcame a tragic war accident. Despite his body being 140% damaged and disabled, he still carried on and persevered so much that he ran marathons after marathons. He believes that no one and nothing else can affect our lives expect ourselves. As he would put in a booming voice: “Who is the boss? I am the boss!`` was his mantra of life. 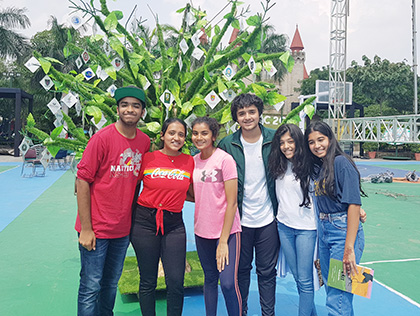 The next keynote speaker was Swami Gaur Gopal Das, who taught the students important values. He explained that whatever happens always happens for the best. For example, he was an engineer and then his life changed and how he is an international life coach. He taught everyone to love oneself and not to compare oneself with anyone else, as everyone will be and is meant to be unique.

The day and conference came to a close with the closing ceremony, a vibrant after-party and tearful goodbyes. The students left the conference with memories and knowledge that will stay with them forever. 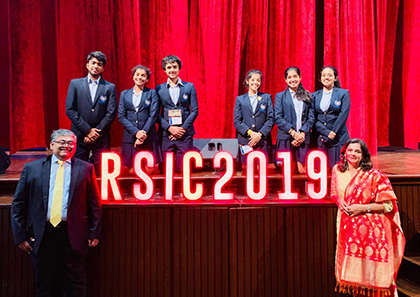