Young Round Square Conference
Scindia Kanya Vidyalaya (Gwalior)
A delegation of 5 DAIS students, accompanied by Mrs. Smita Ullal, attended the Young Round Square Conference on A SMALL ACT- A BIG IMPACT at Scindia Kanya Vidyalaya, Gwalior.We left Mumbai on 18th November and after a fairly long journey due to rescheduling of our flight, we reached Gwalior on 19th November at about 3.45 p.m. After the delegation had settled into their rooms, we first visited the Round Square “Sankalp” project of the host school. The girls of the school have undertaken to manufacture sanitary pads and supply them to underprivileged women of nearby villages. Our students also tried working at the machines.

Registration was at 5.30 p.m and after that the children were allotted their Barazza groups and care was taken to see that no group had 2 children from the same school; the groups were all named after endangered animal species. Once the ice-breaker activities were completed, we had dinner. 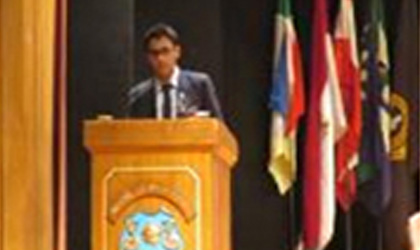 The young keynote speakers were from Welham Boys’, Scindia Boys’ (the head boys Pranav Darshan and Raj Shekhar respectively) and Yamini Singh, the head girl of Scindia Kanya Vidyalaya. Having such young key note speakers was a novel experience indeed. All three speakers stressed on the fact that Round Square is not only about the physical environment around us but also the social and moral environment. All three speakers raised the issues of gender discrimination and corruption. They all felt that, as individuals, we should not feel that the issue is too big to tackle. We should make our own individual effort to address the problem. Hence the stress on the theme- A small act - a big impact.

In the Barazza sessions, the children brainstormed on the issues brought up by the keynote speakers. There was a treasure hunt for the children in the post-lunch session. The day ended with a clay-making activity where the kids were guided by the pottery instructors of the school.

On 21st November, we visited the crocodile conservation park near Morena. The demonstration by the employees on the efforts to protect the near-extinct gharial was a revelation for all of us. Thanks to the cumulative effect of the multi-pronged efforts, the numbers of this once-threatened species has now swelled to 942. Post-lunch, the delegates enjoyed a kite-making session and it was hilarious to see them trying to make their creations get off the ground and into the air!!

The last activity of the day was a workshop on the use of ham radios by a very senior ham radio operator Mr. Bhide. It was a revelation to kids of today’s cyber age that ham radios could work in the most adverse circumstances when all other communications fail. The day ended with a wonderful entertainment evening and dinner hosted by the Principal Ms. Nishi Misra. 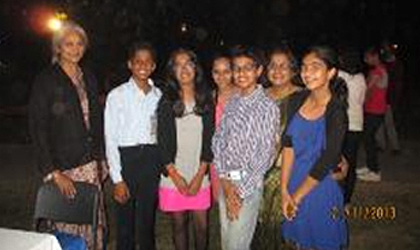 The last day was devoted to the archaeological heritage of Gwalior. The day began with a presentation by Ms. Eliza Hilton of Flow India Foundation- an organization that has dedicated itself to creating awareness among children about our historical heritage. Eliza highlighted how each of us can take our individual small steps to protect and preserve our rich heritage, thus coming back to the theme of the conference. This was followed by a guided visit to Gwalior fort where the children were given a creative writing activity: they had to recreate the ambience of the fort in its heydays during the reign of Man Singh Tomar.

We then proceeded to the Jai Vilas Palace Museum where the children were taken on a fascinating tour of the ornate living quarters of the Scindias. The opulence of the palace left the children awe-struck. On their return, the barazza groups were each given an aspect of the Scindia palace to illustrate and present at the end of the activity. Once the barazza groups had made their presentations, there was a plenary session on the learning outcome of the conference.

The closing ceremony was followed by a spectacular cultural presentation by the children of the host school, a dance party and dinner. There were many tearful faces at the thought of leaving behind new-found friends, much exchange of e-mail ids, addresses etc. accompanied by promises to keep in touch as the conference came to an end. Our delegates certainly came back far more independent, enlightened and enriched by their contact with children of different schools.