Round Square South Asia & Gulf Regional Young Conference
Amman, Jordan - Maraba!
The International Round Square Regional Conference 2012, celebrating the theme of "Think of Others” was held at the King's Academy School in Jordan. Inspired by Palestinian poet Mahmoud Darwish's poem, the theme of the conference centered on empathy, an emotion "so much stronger than sympathy" as it is "the ability to feel with others instead of only for others." 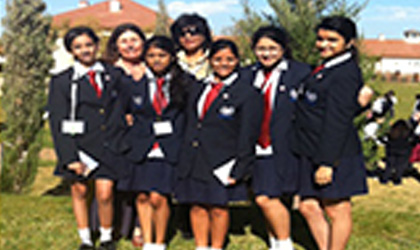 The whole conference gave us an international experience as there were school delegations from Jordan, Africa, Bangladesh, Pakistan, Palestine and many schools from India. The week-long conference started on December 1, 2012 and the several keynote addresses covered on the impact of service projects on local communities, the history of the Arab-Israeli conflict and the Universal Declaration of Human Rights and the origins of human rights and the concept of “fundamental equality” with reference to ancient Greece. Students visited the historic Petra. They all hiked up 900 steps to the monastery which was quite an adventure. The highlight of the trip was 'floating' in the Dead Sea. Students also visited the famous St. George Church and Mount Nebo.

Students took active part in community service as well. One group of students was sent to a community rehabilitation center where they learned paper making, woodwork, embroidery, weaving and interacted with the children who were deaf. The other baraaza group did construction activities with an organisation called "Habitat for Humanity" where they were made to paint a man's house.