Round Square Regional Conference
Denmark Theme: Exploring Heights Encounter,
Engage and Enjoy
It was held at and by Herlufsholm Skoole. Situated on a vast green patch of land in Naestved, a small town near Copenhagen, Herlufsholm School and Estate is a private day and boarding school for boys and girls, founded in 1565. Schools from Canada, Armenia, U.K., Germany, Australia, Kenya, India and Denmark participated. 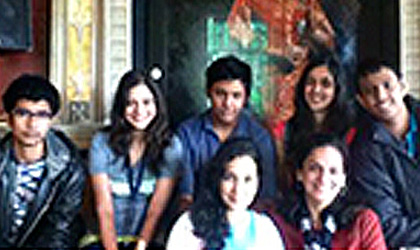 The first keynote speaker, Naser Khader gave a very insightful speech on the true meaning of democracy. He compared the Danish Democratic Government to the Syrian Government. He used his experiences with the Syrian government and his time with the Conservative Party Parliament of the Danish government as a basis for the comparison. The second keynote speaker, B.S. Christiansen, shared his experiences when he was in the army and related them to life situations. He explained that taking risks is equal to freedom and daring is a crucial factor.

Our students visited the Danish parliament which is in Copenhagen's Christiansborg Palace. They also visited the free town of Christiana, a self-proclaimed autonomous neighbourhood of about 850 residents, covering 34 hectares in the borough of Christianshavn in the Danish capital Copenhagen. Civic authorities in Copenhagen regard Christiania as a large commune, but the area has a unique status in that it is regulated by a special law, the Christiania Law of 1989 which transfers parts of the supervision of the area from the municipality of Copenhagen to the state.

Delegates also went past the palaces of the current monarchs of Denmark and visited the iconic statue of 'the little mermaid'.