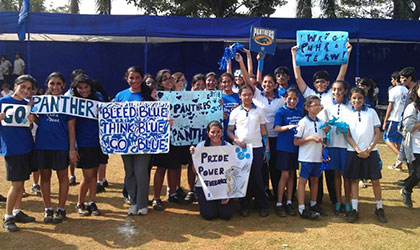 The day the council of 2012-13 was announced was overwhelming. Of us newly appointed Panther council members, none of us were able to fully comprehend the source of the emotional, teary speeches of advice that were being made to us by our predecessors. So much has changed since then! The endless lists, the seemingly insatiable lists of lists, and even the continuous early mornings in the weeks leading up to Sports Day went from being perceived as tasks, to enjoyable activities within a month of having been appointed. All credit for this phenomenon goes to the student body of the Panthers.

No house so well embodies their motto as does ours. Pride, Perseverance, Power. Pride in an inherent characteristic of every Panther, pride for being a member of the House that has won the House Cup the most number of times and that continues to emerge triumphant. Perseverance is pivotal, for every Panther knows that dedication and hard work are essential on the path to victory. And Power is ubiquitous, resonating strongly from the cheer that we let out at the end of every Panther assembly. The fact that the Panthers as a student body are so well able to synthesize the three aspects of our motto into a positive, confident outlook to sportsmanship and house spirit is reflected in the attitude our House takes to every event, be it Sports Day or Primary Handwriting. The unwavering spirit and enthusiasm that is so uniquely characteristic of a Panther is what makes our House so amazing. We cannot articulate just how lucky each of us feels to have been given the opportunity to lead such a fantastic group of people. Regardless of which of the houses comes out of 2013 with the House Cup, we know that the Panthers will be the true winners, victorious in the strength and support that we have built up over the past decade. Aditi, Taronish, Natasha, Vihaan, Anoushka, Antara, Vinay, Tara, and Angad