Eleven students of Grades 9 and 10 participated in a Cultural Exchange with the Musashino University and the Chiyoda International School, Tokyo, from 1st to 8th July, 2019. A trip that would result in the forging of several unbreakable friendships and the enriching fusion of cultures proved to be an unforgettable and exciting one, filled with amazing sights and unique experiences. 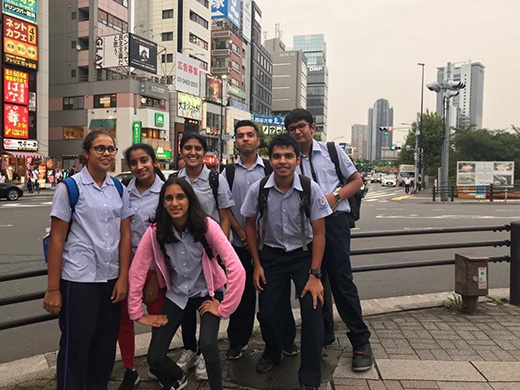 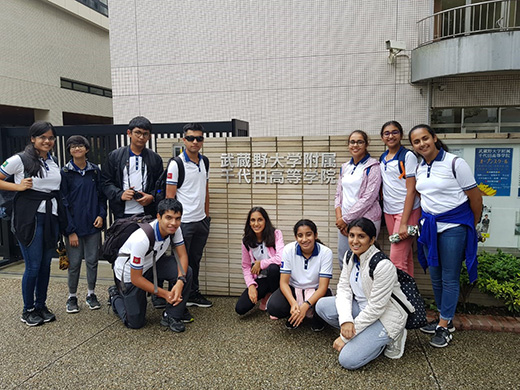 DAIS students interacted with the students of Musashino Chiyoda High School and participated in learning the Japanese art of dyeing using natural colours from sunflower called Benni. The students got a chance to design their own handkerchief using marbles and elastic bands to create interesting patterns. Earlier in the day, they rediscovered the basic computer programming skills in an ICT class and also learned how to create rhythms and melodies in a music class using GarageBand on iPads. Later, the children watched their Japanese counterparts dance and then, our own children joined in. The Japanese children taught the Indian children the dance steps which were similar to the Indian Garba Dance. The activity was an extremely enjoyable experience. The day ended with watching the India vs Bangladesh game. 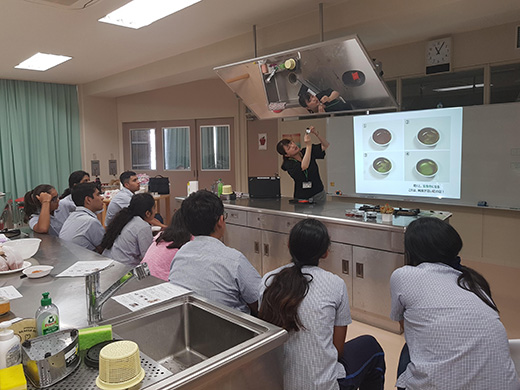 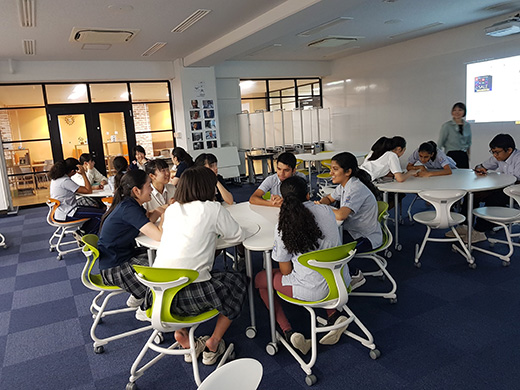 After breakfast, which ranged from scrambled eggs to the traditional Japanese breakfast of miso soup and rice, the students hopped on to the local metro at Ichigaya station, about 5 minutes from the hotel. They then got on to the Hato Tour Bus (“Hato” meaning “Peace” in Japanese) in central Tokyo. Their first stop was at the Tokyo Tower, a 333m tall building. On the highest floor was a small skywalk, where the students enjoyed looking down at the streets of Tokyo and trying to spot various locations they were familiar with. Next, they experienced a traditional Japanese tea ceremony, where they all enjoyed green matcha tea and traditional sweets made by a Japanese Tea Master. They also got the chance to visit the Imperial Palace Gardens as well as a park quite similar to the Central Park in New York. Next, they boarded a cruise to Asakusa Temple, where they shopped for a couple of hours. They took the bus back to the starting point, and due to popular demand, embarked on an hour long journey on a bullet train, which can currently only be found in Japan. To end the day, the students dashed to Itoya - a stationery shop with 18 storeys! They stayed at the store minutes after the closing time, but thoroughly enjoyed the affair. Completely fatigued, the students had a quick meal and retired to their rooms after a long yet thrilling day. 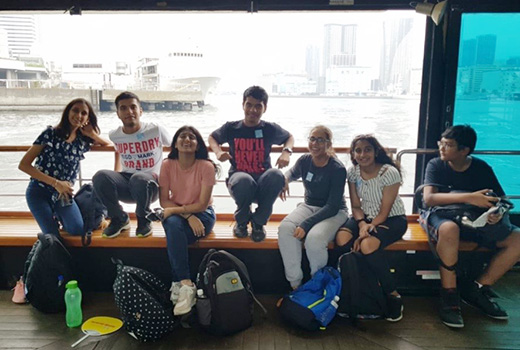 The day began with an enthralling dance session where students learnt a traditional Japanese dance called Bon odori. The students also attended an English lesson where a creative new sport was taught by the students of Chiyoda High School. A cultural exchange of games was the next activity on the agenda, where exciting Japanese and Indian games like kho kho were played and taught to the students. They then had an interactive TOK session in which the students from India put henna on the Japanese students. All the students completely adored this session. Later, the students taught everyone yoga and Kaushik Sir led an interactive Judo session. Afterwards the students explored a 100 yen shop which was a stress buster and fun outing. Their highlight of the day was the spectacular digital art museum which was innovative, captivating and one of a kind! 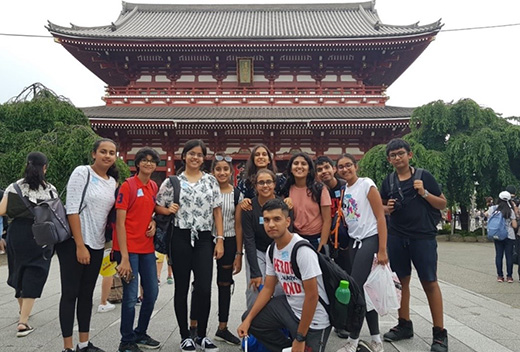 The fifth day the students checked out of the hotel. The day was filled with activities and adventures. The students first went to the school from where they went to Chiyoda Nursery school. The day care was an enriching experience where the students explored the nursery and interacted with children from ages 3-5. They heard a story of the Star Festival in Japanese and danced on a Japanese folk song in sync with the famous Indian number called ‘Bum Bum Bole.’ Once this was over, students travelled to the sports arena where they attended Chiyoda High school’s sports day. The students watched a number of races and sporting events that were unique and exciting. There were few memorable races like the 8 person relay along with a unique sport where many girls have to cluster together and stand on one beam before falling. All of the events were absolutely captivating. The highlight of the event was the tug of war between the Chiyoda High students and DAIS students. 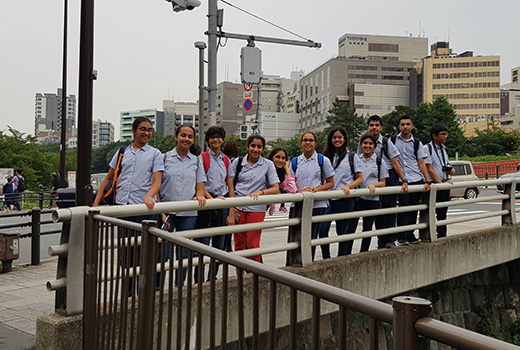 Although the students lost against the Chiyoda High students, they had a wonderful time just participating. The cheerleading and dance squads of Chiyoda High entertained the audience with some exciting and captivating dances. Last but not the least, the closing ceremony and prize distribution followed after which the students embarked on their journey to their hosts’ houses. 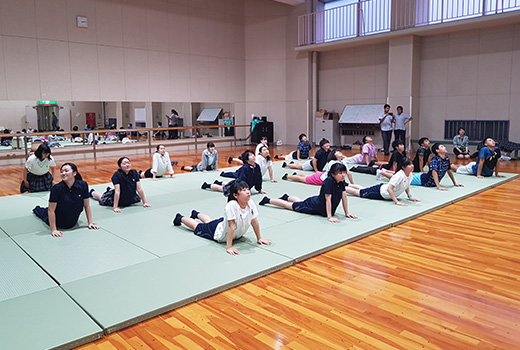 The weekend involved the students immersing themselves in all almost all aspects of Japanese culture, along with their hosts and their families. There were a vast variety of activities the students took part in, ranging from attending a karate class to singing in a karaoke booth! One student lived in a traditional Japanese house in the suburbs that had a view of the regal Mount Fuji, whereas another lived in the centre of Tokyo, right in the thick of things, shopping, bowling and exploring. One lucky student spent an entire day at the almost sacred Disneyland in Tokyo. Another exciting experience viewed by one of the students was a live art competition, as well as a Japanese orchestra. They all interacted with the host families, and made friendships and memories to last forever! 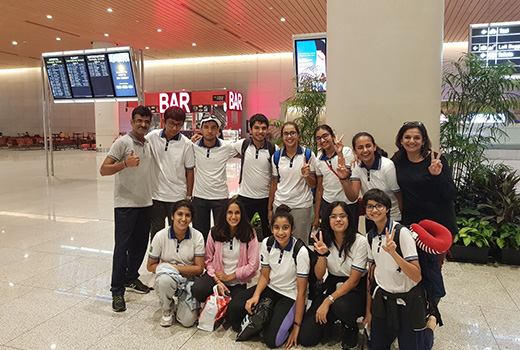 Stuti Daga: The one week that we spent in Japan at Chiyoda high school was one of the best weeks I could have asked for. The trip taught me how to be patient and punctual and has also given me so many memories.

Anirudh Fadia: This truly enriching journey bequeathed upon me skills, lessons and values to last an eternity. One of my most interesting insights was the many similarities both sets of cultures observed.

Yash Fadia: The days we spent in Japan were a potpourri of busy streets, crowded trains, visiting the main tourist attractions, but most importantly integrating a new culture into our daily lives.

Suhani Mehrotra: The Indo-Japan exchange trip was a wonderful experience. In just 8 days we were introduced to Japanese culture. Learning about the food, the lifestyle and interacting with the Japanese students was a unique experience.

Hridhika Vora: I think that the exchange program was an amazing experience. I learned so much about japanses culture and lifestyle while living with my host family. The students we interacted with in the school were extremely nice and helpful and taught us a lot.

Tamanna Sanghvi: This trip opened up a part of me that I also was surprised to see. Reflecting on the trip now, I realise how memorable this trip has been...I have developed a bond with the group of 11 traveled with. They were around me all day and I got to learn more about them.

Devika Kothari: I can safely say that our cultural exchange program with the Musashino University of Japan was truly one of the most enjoyable and enriching experiences of my life. Not only did I gain exposure to a whole new culture and lifestyle, but I also formed some amazing friendships and made some of the best memories of my life.

Piya Saxena: I really enjoyed going on the bullet train, and the technology they had to offer was astounding. The homestay gave us an invaluable insight into the daily lives of Japanese people, and was an exciting experience.

Arushi Sharma: I was glad to make new friends and learn about a new culture. This trip was an amazing opportunity and I am thankful that I had the chance to experience it.

Madhav Kejriwal: This experience left me spellbound. A week is hardly enough to explore a city that spans nearly 2,200 square kilometres, but it was enough for me to be completely enchanted by the mesmerising urban colossus that is Tokyo.

Diya Patel: The trip to Tokyo, Japan was a lot of fun and educational. We got to experience the different traditions, the dance, the sports and also the language. The students in the high school we visited welcomed us with open arms into their city and their school.