“Welcome to India” - a postcard hosted by DAIS on the 29th July, 2020, had over 39 participants from schools across India, South Africa, Oman, Dubai and Japan. During the postcard, various aspects of Indian culture and popular Indian practices were discussed extensively. Additionally, several similarities and differences between Indian and other cultures were also brought out through fruitful discussions. 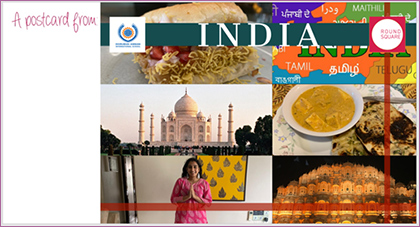 The student Core team collaborated with their teachers in the initial planning stage to scaffold the 90 minute session module to bring out the theme of the postcard. The team conducted their research on Indian culture and traditions. This helped them while ideating the 5 key aspects that they would focus on during the postcard. They worked out a schedule and the team outlined the structure of their postcard by planning on the key topics of discussion to be included in this informal interactive session. They brainstormed to plan interesting games that would stimulate discussion and engage the participants. The games were finalized keeping in mind the varying levels of familiarity with the Indian culture, which would help involve all the participants. The students came up with an interesting set of questions that could be used to spark conversation promoting a dialogue between the participants. They shared the information on India in the form of a short interactive PPT including traditional practices that originated in India to sharing the diversity in our art, culture, food, festivals etc.

The postcard session started with an icebreaker on how everyone had kept themselves occupied in lockdown. 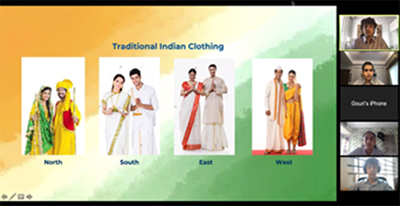 This helped the students get familiar with the others in the group. This was followed by the presentation that highlighted the dances, cuisine, and languages among other aspects of Indian culture. Everyone was then given the opportunity to elaborate on their response submitted to the stimulus questions: Why would you want to come to India? or What about India fascinates you? These responses resulted in some wonderful insight into the beauty and diversity of India. 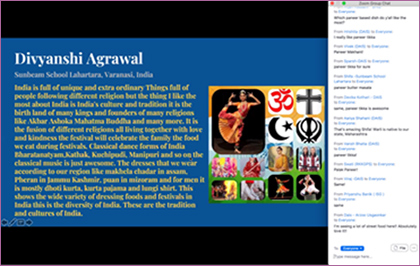 For the next half an hour of the session, all participants were split into different breakout sessions, named after popular Indian sports such as Khokho and Shatranj. To get to know one another better, they each introduced themselves in their mother tongue (regional language). After a few engaging and interactive games, the students delved into the crux of the postcard: learning more about Indian culture as well as sharing perspectives from their own cultures. The conversations proved to be incredibly insightful, interesting, and effectively conveyed the theme of our postcard – Welcome to India. 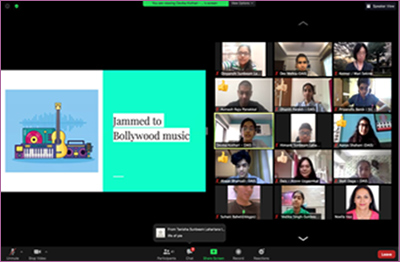 Everyone moved back to the main meeting and one volunteer representing each breakout session summarized their discussion and shared their learnings. During the concluding stage of the session, the participants played “react if you relate” - a game where they would raise their hand if they related to the given experience. The floor was then opened for questions and comments, which opened up more discussions that ranged from Maggi to Bollywood to Lockdown habits.

In conclusion, the postcard yielded meaningful discussion as it helped broaden perspectives and provided students an opportunity to share their opinions on their culture. The postcard connected students from across the world and received overwhelmingly positive feedback. Some of the encouraging feedback statements were:

"I attended the postcard today and it was really fun. This was my first time and I thought it was going to be a formal one but it was a really interactive session and I would like to attend more sessions like these.”

"That was wonderful - well done! You must have put a lot of work in - your students were so well prepared and a real credit to the school. Please pass on a big thank you and congratulations from me.”

The DAIS postcard – ‘Welcome to India’, proved to be a huge success and was an enriching experience for both participants and hosts. While it helped the participants learn something new about the culture of India, it helped the host students experience the pride of belonging to a country rich in culture, traditions and diversity.