Riyaan Bakhda and his team, "Team saBOTage" won India the 6th Rank ( Senior Open Category) from 40 teams from over 35 countries at the International World Robotics Olympiad in Thailand, Nov 16-18. The team was chosen to represent India after we won the Gold Medal from over 50 teams at the national Indian Robotics Olympiad in Ahmedabad.

The project was a commercial Artificial-Intelligence-enabled robotic system which fabricated food containers using banana leaves and hygienically packed food in them. The project gives a cheap and green alternative to the hazardous plastic containers widely used to store food. The team garnered media attention when it was featured in an article by The Better India newspaper and in a Radio interview aired on 106.4 FM RadioGold 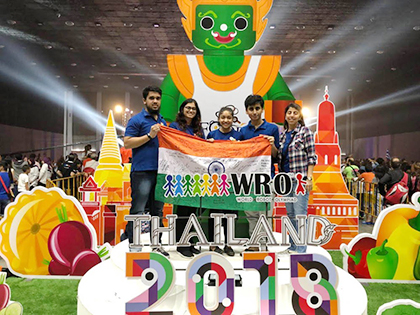 The article by The Better India newspaper:
https://www.thebetterindia.com/164286/children-innovation-eco-friendly-changemaker-mumbai-news/


Riyaan participated in the National Championship of the World Robotics Olympiad in Ahmedabad where he presented his Robotics Project which aimed to provide a new cheap, safe, and hygienic standard for the packaging of foods in the restaurant industry. For this project he won a Trophy and a Gold Medal. His team comprised of two other students from Utpal Sanghvi International School. All of them favoured an invitation to represent India at the World Robot Olympiad 2018 in Thailand.

The project aims to provide a safer and cheaper alternative to replace the hazardous methods of packing food nowadays, in plastic containers, newspapers, and aluminium foil - all three of which are suspected to be greatly toxic to the food stored within them and human health. 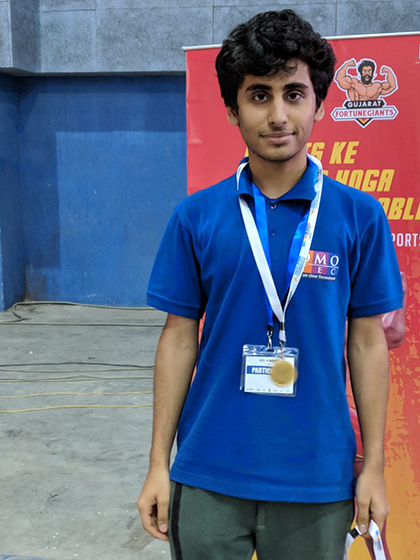 After research, it was found that banana leaves - which have been traditionally used in the preparation and storage of food in South India - actually provide many natural preservatives and healthy antioxidants to the food within them. Hence, the aim of the prototype machine that was built was to secure food hygiene and food nutrition by packing food in parcels made of banana leaves as opposed to Plastic, Aluminium, and Newspaper. 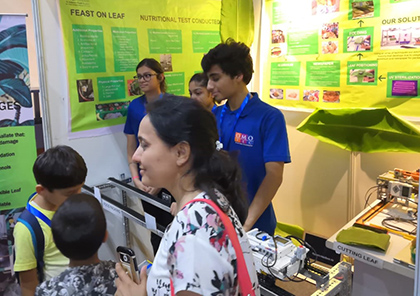 The team’s prototype machine automatically cuts, processes, scans, and sterilizes raw leaves to make them usable in the packing of Foods. It is programmed to wrap the food with the leaves in a secure and sealed parcel which restaurant owners can give to the customers for later consumption.

Programming multiple complex systems like the Arduino micro-controller, the Raspberry Pi micro-computer, and the EV3 computer brick with various Languages like EV3, Python, and C, they built a large functional prototype which was presented to the judges at the Open Category Exhibition in Ahmedabad on September 15 and 16, 2018. 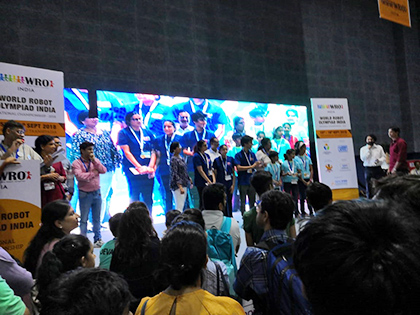 Hearty Congratulations to Riyaan and his team who secured the 1st Place in the Senior Open Category, and has been chosen, from over 50 competing teams, to represent India at the International Championship in Thailand this November.